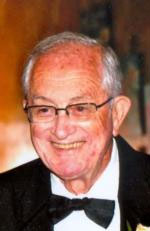 A Memorial Mass for Ivan Jude Arceneaux, 82, will be held Tuesday, December 14, at 1:30 p.m. at St. John the Evangelist Catholic Church in Jeanerette. Visitation will begin at 12:30 p.m. in the church. Mr. Arceneaux died at 12:30 a.m. Thursday at a local health care facility. In keeping with his wishes, his body was donated to Tulane Medical School. Readers for the Mass will be Anne Credeur, Harvey Breaux, Jr., and M’Elise Trahan. Gift bearers will be Claire and Denny Beslin.

Born in Lafayette on June 28, 1928, Mr. Arceneaux attended Mt. Carmel and Cathedral Schools, the University of Louisiana at Lafayette, St. Joseph Seminary in Covington, Notre Dame Seminary in New Orleans, Gregorian University of Rome, University of Fribourg in Switzerland, Catholic University in Washington, D.C., McNeese State University in Lake Charles, University of Southern California in Los Angeles and CCSU and Delmar College in Corpus Christi. He was a teacher and coach in Rayne, Lafayette, Jeanerette, and Jennings. He was a chaplain and Personnel Sergeant of the Louisiana National Guard, 256th Brigade, retiring as a Major after twenty years of service. Mr. Arceneaux was active in serving the elderly through various positions with the Council on Aging in Houston, Corpus Christi, Leesville and Lafayette. He was Director of Public Information and Education for Calcasieu Community Action; Directory of Halfway House, State Department of Substance Abuse; Coordinator of RSVP with SMILE Community Action Agency of Lafayette. He was an active member of the Texas Silver-Haired Legislature. In 2006, he was presented the Rabbi Henry Cohen Humanitarian Award in Galveston. As a Catholic priest of the Diocese of Lafayette from 1952-1973, he served parishes in Rayne, Jeanerette, Jennings and Lafayette. During that time, he was Director of the Bureau of Family Life for many years and was a founder of the St. Jules Credit Union. He was most recently employed by David Funeral Home. His memberships included AARP, Knights of Columbus, Lions Club, Rotary, RSVP and Concerned Citizens for Good Government. Mr. Arceneaux spent the majority of his life working as an advocate for the elderly and senior citizens.