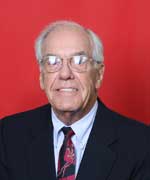 Max Christopher Kennison, 80, of Austin, Texas, passed away on February 2, 2009. He was born in Indiana in 1928 by parents Fred and Fern Kennison. He left his home on his own when he was 13 and spent much of his childhood with his uncles and a foster family, Ma and Pop Kyer.

Max served in the U.S. Navy at age 18 for 4 years just after WWII, and volunteered to serve again in the Korean War, where he sustained combat injuries, which ended his military career. He was awarded several medals for his service.

After returning to the U.S., he completed a Bachelor of Science in Engineering at New York University, and a master’s degree in Nuclear Physics.

Max worked in the field of nuclear engineering and physics at several companies including RCA in New Jersey, and later worked in nuclear physics at ORTEC in Tennessee where he made significant contributions in the field of Neutron Spectrometry and had several articles published. His career brought him to Austin, Texas in 1968 and he worked in a similar field at Accelerators Inc. in Austin, Texas. He later formed Microlec, a manufactures representative company, and spent the last several years of his working career selling electronic assembly equipment used for circuit board production.

After retiring, Max spent much of his time volunteering for different causes he believed in, particularly for those causes concerning senior citizens. He also served with the Texas Silver Haired Legislature.

Max will be remembered by his cheerful and positive nature. He had the uncanny ability to charm most people he met. He was a gifted conversationalist and had many ideas for topics of conversation.

Max loved the Port Aransas area, and was an avid fisherman. He would often visit the area with his sons when they were younger, and taught them lots of cleaver ways to catch fish. He also taught them to enjoy the experience even when no fish were caught.