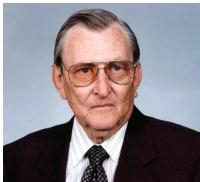 Willie Gaston West, a long time resident of Corpus Christi died on January 28, 2012. He was born on February 19, 1922, in Gustine, Texas, the third son of Ida and Willie West. He graduated from high school in Stephenville, Texas where he was an honor student and played football, basketball and baseball. He attended Tarlteton State College. During World War II, he joined the Army and was stationed at Camp Hulen, Texas, where he met his beloved wife of over 67 years, Margarite Miller West of El Campo, Texas. He was later stationed at Tinian Island in the Pacific, preparing for the invasion of Japan.

After the war, he received his B.A. from The University of Texas at Austin, and worked on a master’s degree. He taught at San Felipe High School in Del Rio, then moved with his family to El Campo, where he began a 21-year career at Foremost Foods. He later worked for the Department of Human Resources and served as a volunteer coordinator for the Nueces County Juvenile Justice Development.

W. G. was an active leader in the community. He was a state vice president for the Texas Jaycees; President of the Rotary Club in El Campo; served as an Elder in the Presbyterian Church and delegate to the church’s General Assembly. While in Corpus Christi, he served as Chairman of the Advisory Council on Aging of the Coastal Bend; TSHL/Advocacy Committee Chair; President of SCORE and Speaker of the House for the Silver-Haired Legislature.

He is survived by his beloved wife Margarite; son David and his wife Carol of San Antonio; daughters Cherye West-Tucker and her husband Keith Tucker of Austin and Donna Smith and her husband David Smith of Houston; and grandchildren Bond, Holt and Libby West; Marguerite West-Driga and Matthew and Michael Smith.

Services will be held at Seaside Funeral Home at 4357 Ocean Drive at 10:00 A.M. on January 31, 2012. Burial will follow at Seaside Memorial Park. In lieu of flowers, memorials may be sent to a charity of your choice.